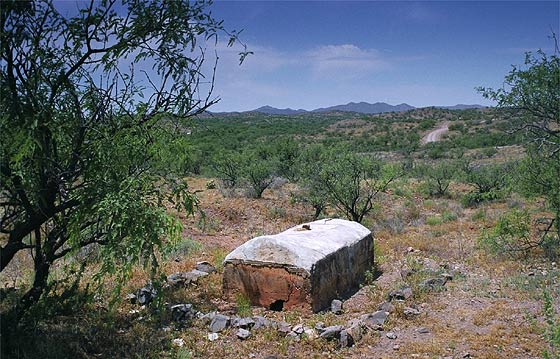 In this concrete vault at the Cerro Colorado Mine, John Poston, the brother of Charles D. Poston, the man who was known as the "Father of Arizona", is buried. He was murdered at the site in 1861.

Hello, contrary to your information and accompaning picture John Poston is not buried or entombed in the concrete you show. As historical writings document John was hauled by his brother and others to Arivaca by wagon to the mill site where another mexican uprising was put down by a black cook. He was buried there the same evening he was killed. He was buried in Arivaca by his brother, Brunkow the mining engineer and several others. The "grave" you have a picture of didn't exist 15 years ago except as a concrete floor with wall about 6-14 inches high and no top. Many people have used metal detectors both inside and out and stood in it. The man buried in the tomb was a mexican minero(miner) who was killed in a cave in in the mine in 1901. Both Mexicans from Sonora and Indians pilliged the grave, stole the body and destroyed the grave in doing so. One of Postons great grand sons thought it was a good opportunity to build a monument but it has slowly been changed!
John Postons grave over the last 10 years including the placement of a metal plate.
cerrocolorado1086-062 (© 2001 by Daniel Ter-Nedden) Buy pictures
Back to Arizona Ghost Towns