Before 1848, Mexico ruled over California, a remote region isolated from the rest of the world by 1,800 miles of desert and impassible mountains. By sea it was 18,000 miles via Cape Horn.

In the coastal regions settled Spaniards and Mexicans. The inland area was the domain of Indians and a few settlers who had been granted estates by the Mexican government. Among those settlers was Captain John Sutter, a Swiss, who had been fortunate enough to obtain a full 11 leagues of land (spanning 60 miles in lenght) in the Sacramento valley from Governor Alvarado of Mexico. Sutter began to build a fort, which was a stopping place and home for many foreigners and Americans who traveled to California. He was engaged in a varity of projects, including his cattle ranch, fur trade and trapping and the construction of an irrigation system.
With the influx of immigrants over the years the communitiy around the fort grew rapidly. Lumber was much in demand and Captains Sutter agreed to supply the necessary capital for a communitiysawmill. The site chosen was some 45 miles northeast of the fort, located on the south fork of the American River in the town of Coloma. 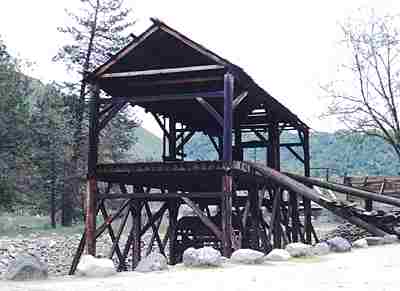 During the course of construction Sutter's carpenter, James Marshall, discovered a problem with tailrace on the mill. It was early in the morning of January 24, 1848 while checking the tailrace that Marshall noticed an object shining in a foot of ater at the bottom of a ditch. He reached down and picked it up, and his heart began to thump wildly as he realized he was holding a gold nugget.

Sutter planned to keep the find a secret for as long as possible, knowing very well that he could become a very wealthy man. Marshall and Sutter did their best to obtain more land without raising suspicion. Although they were unsuccessful in their goal and word of the discovery finally did leak out, few people took it seriously. It wasn't long before a shrewd businessman by the name of Sam Brannan came to the conclusion that the more people who heard about gold in Coloma, the more supplies they would have to buy from his general store to outfit themselves with in their search for the magical color. With that thought in mind, Brannan filled a small bottle with several bright, golden nuggets and rode up and down Montgomery Street in San Francisco yelling, "Gold, gold from the American River!".